Have you ever thought about how solar energy impacts on the grid? 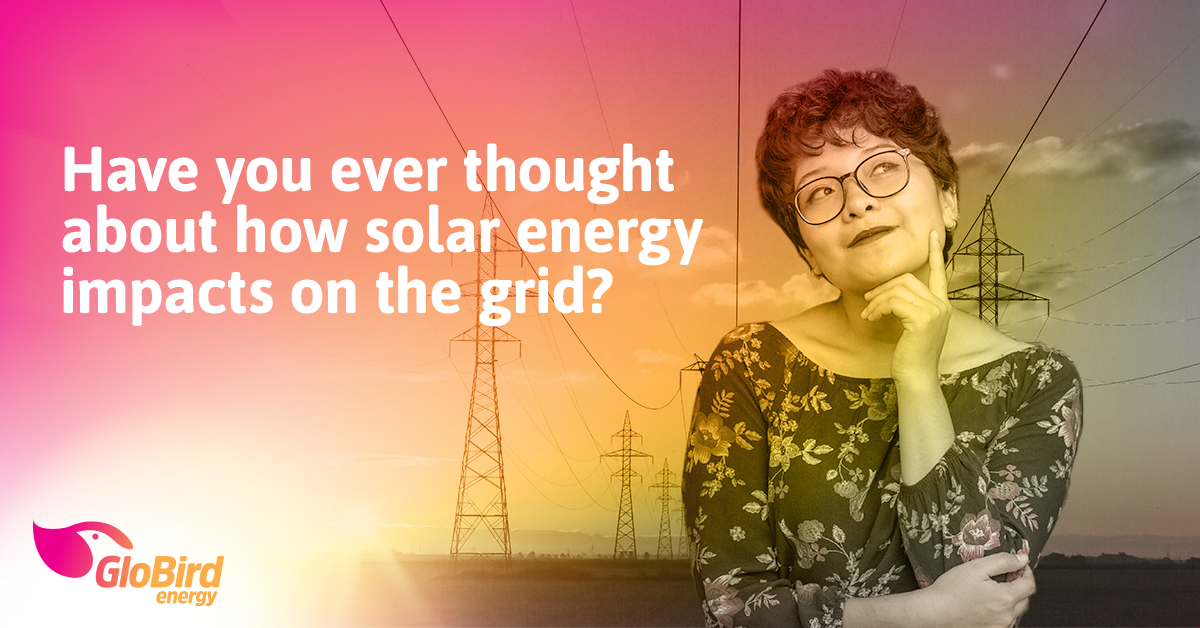 Have you ever thought about how Australians’ world-leading penetration of rooftop solar impacts on the existing distribution infrastructure, that we generally call ‘the grid’?

We have. We think about it a lot. This week, we’ve written down some of our thoughts …

Imagine a big balloon filled with water. The balloon has two pipes; an inlet pipe pumping water in, and an outlet pipe sucking water out.

If too much water goes in, and not enough is drawn out, it will eventually explode.

That’s sort of how the grid works.

If too much power (or too little) is being sent into the grid, it will fail.

So there has to be a carefully controlled balance between what’s being drawn out – our usage, or demand – and what’s being pumped in – the generation, or supply – at all times.

In the energy market, this balance needs to be orchestrated, and the control lever used to do this is price.

For example, if lots of people are using power and demand is high, the wholesale market price will go higher. This motivates generators to turn on and sell power.

As more generators turn on, the price will react and start to trend lower.

The opposite happens when too much power is being pumped in.

Not only will the price that is paid to the generators start to fall but, if they keep generating, the price can even go into the negative. In other words, the generators have to pay to put power into the system during a time of extreme oversupply. Naturally, this motivates generators to turn off.

Most generators react to the market price, and they control when they decide to generate.

However, solar and wind don’t work like this. They simply send power into the grid whenever the sun shines or the wind blows.

Solar power is amazing; natures light gifting the earth with energy. And we love it.

However, too much of any one thing – even if it’s a good thing – can cause problems.

When there was only a small proportion of our collective power needs coming from solar, it didn’t matter much. However, now that the volume has become more significant, there are noticeable impacts.

As we noted in our last blog post, Can you guess where Australia ranks in global solar energy production?, Australia now has the highest uptake of solar (per capita) of any country.

The problem is, nothing can beat stable dispatchable power when it comes to what’s needed to keep power prices low.

A traditional power station used to sell its power all day and night for a relatively stable price. The consistent income was enough to justify staying on all the time.

Now, these traditional power stations often get paid less during times when the sun is shining and the wind is blowing, so they’re not as viable as they used to be. As a consequence, they’re more likely to close down and, as a result, we start seeing more extreme price fluctuations on the wholesale market.

The rubber balloon is expanding and contracting constantly – something we’ve never had to cope with before.

With most coal-fired power stations coming to the end of their life, we’re looking at less and less stable dispatchable power in the system.

People who don’t understand the market think that more solar generation should lead to lower prices overall. Unfortunately, this is an overly simplified view of what is a complex market.

It’s not as simple as adding up the total volume of power over a year that matters. It’s matching the demand and supply in real time that stabilises prices.

When the federal government talked about introducing the National Energy Guarantee (NEG), they recognised this and tried to make sure that a portion on generation would come from a ‘dispatchable’ source.

Dispatchable means the power can be generated on demand and doesn’t rely on things like sun or wind that are intermittent.

A great source of dispatchable power is hydro because it’s a natural way of storing power for when it’s needed.

The power market in Australia is going through a period of transition. The rolling blackouts we had in Victoria this summer highlight the challenge. Balance will eventually come back when there is more battery storage, hydro, and other forms of dispatchable power, complementing and working in sync with what we get from wind and solar generation.

The key to a successful transition is a pragmatic approach with all options on the table and a clear long-term plan without the political ideological debates that have caused policy deadlock.

Many industries and politicians supported the NEG, even if they didn’t fully agree with every aspect.

There’s an old saying “even a bad plan is better than no plan at all”. The NEG didn’t get put into action, and that’s OK. There seems to be general agreement about the need for more dispatchable power and better management over intermittent generation. As this happens, prices will eventually fall.

Solar power is amazing, but it needs to be matched with storage to allow for the power generated to be used more steadily and at times of greatest demand. If this doesn’t happen, there will be too much power available at one part of the day, and not enough at another.

This would also mean that supply could never be matched with demand. What would it be like if we could only access enough power when the sun was shining and/or the wind was blowing?

At the same time, the imaginary balloon would be failing – repeatedly.