Global Energy Crisis: how real is it and what does it mean for you 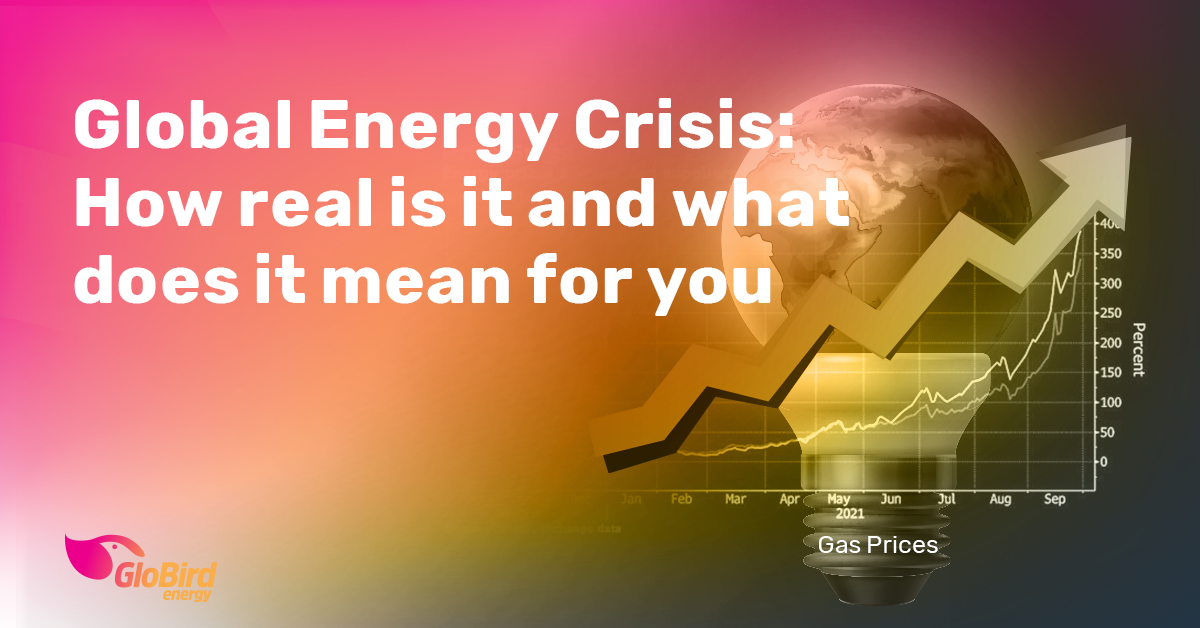 Increasing gas prices around the world have led Energy Users Association of Australia chief executive Andrew Richards to warn: “We are seeing storm clouds on the horizon”.

The impact of a higher gas price is also hurting residential customers. We know how much bill shock throws budgets out, so we want to make sure you’re prepared before you see an increase to gas bills.

How bad can it be?

Given some of the articles we’ve been reading, you’d be forgiven for thinking the ‘Global Energy Crisis’ is one of the seven signs of the apocalypse.

…we wouldn’t be surprised to see people building bunkers and stocking up on canned foods!

But before you rush to the nearest Safeway to load up and dig your own hole in the ground, let’s dig into what’s going on around the globe and see how much it impacts Australia.

Thankfully, there is some good news along with the bad.

It’s undeniable: gas now costs a lot more than it did

Now, as we head into the northern hemisphere winter, demand for oil and gas in other parts of the world is only going to increase – and that means competition for the available resources will heat up, too.

And it has already. Big time.

Buyers in north Asian countries, particularly Japan, South Korea, and China, have paid over $200 million for single cargoes of liquefied natural gas. That’s more than double the previous record and equates to over $40 per million British thermal units (BTU).

That record spot market increase in Asia marks a massive turnaround from the depths of the COVID-19 crash last year when spot LNG cargoes were selling for less than $3 per million BTU.

But what’s driving the record surge in gas prices?

It’s not all about COVID…

Some of the blame can be attributed to the disruption to the entire world economy caused by the pandemic.

As we’re seeing with a lot of products (you would have seen plenty of empty supermarket and K-mart shelves), as the world economy reopens, supply simply can’t keep up with demand.

It brings home the fact that, even though we never really notice, almost everything in our advanced economy works as it does because it’s all chugging along steadily. The interruption we’ve all experienced has stopped a lot of regular business activity in its tracks, and now it’s taking time to put everything back in place and slowly get back up to speed.

However, there are several other factors causing tightness in global energy markets, including:

We went into a bit more detail in our recent post: What can we learn from the UK energy crisis?, which we think is well worth a read for further context.

The impact on Australia

There’s no escaping the fact that Australia is part of the global economy – and needs to be. That’s why the Department of Foreign Affairs and Trade works so hard for years negotiating international free trade agreements.

The problem with high gas prices on the international market is it gives Australian gas producers an even greater incentive to sell their gas overseas. You might recall that last year Australia overtook the resource-rich Gulf state of Qatar to become the largest gas exporter in the world.

So, even though we might be somewhat isolated, Australia is not insulated from what’s going on elsewhere. Sometimes what happens in other parts of the world is worse than it is here, and sometimes it can seem worse for us. It’s usually a combination of our location, the size of our population, and the strength of our economy – one way or the other.

The significant fluctuations we often see in petrol prices illustrates that.

Often, we get to see what’s happening elsewhere before Australia is impacted, which can give us time to prepare ourselves and, hopefully, put some mitigation strategies in place.

University of Melbourne experts estimate that there are 58,000 petajoules (PJs) of relatively easy to extract gas in Australia. That’s enough to last Australian customers for around 100 years, at current rates of use.

So, there’s plenty of affordable gas without opening new fields. The problem is that it’s all been reserved for export by the big gas companies. This leaves less for domestic supply.

The Canberra Times put it best when they said: “Just as Ireland was exporting potatoes to England during the Irish potato famine, Australia had abundant and cheap gas – we just allowed companies to export it overseas”.

The ACCC has been watching things unfold. On 19 April 2017, the Australian Government directed the ACCC to conduct an inquiry into the supply of and demand for wholesale gas in Australia and publish regular information on the supply and pricing of gas for three years. On 25 July 2019, this inquiry was extended until December 2025.

On 21 January 2021, the Government announced a new Heads of Agreement had been signed which commits LNG exporters to offer uncontracted gas to the domestic market first, on internationally competitive market terms, before it’s exported. The new Heads of Agreement was entered into in late December 2020 and operates from 2021 through 2023.

On 15 September 2020, the Government announced a series of policy measures to unlock more gas supply, deliver an efficient pipeline and transportation market, and empower gas customers.

So, although we will see high prices in the short term, there are wheels in motion to likely stabilise the gas price in the long term. After all, we should be able to sell potatoes overseas while still having enough to eat ourselves.