Research is key to getting optimal solar returns 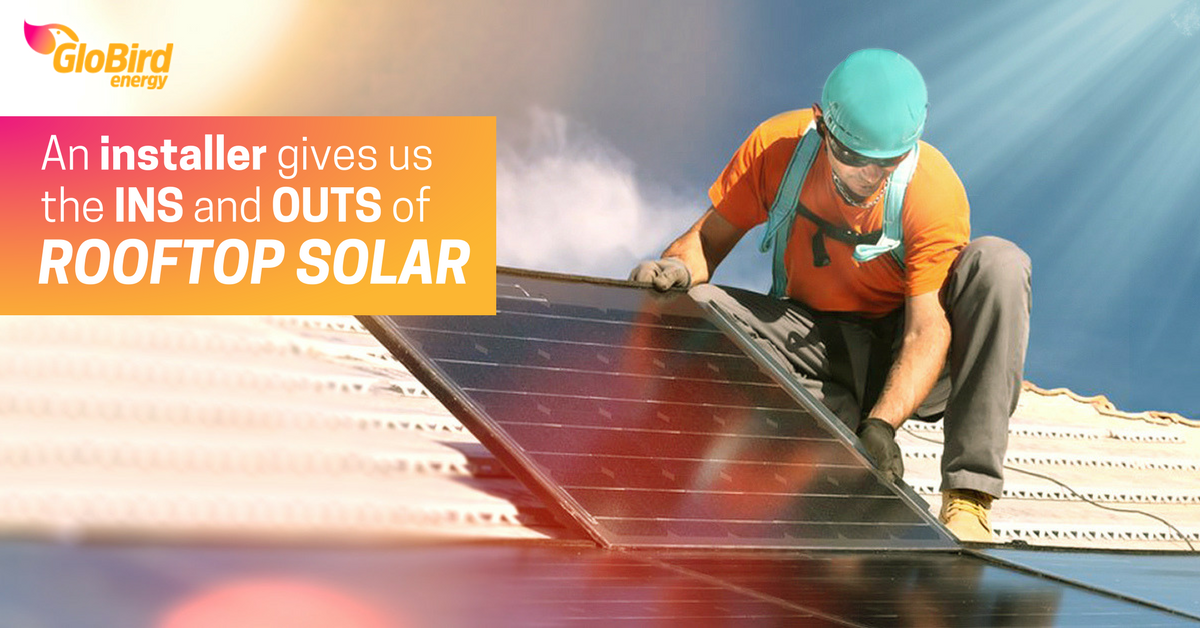 Here at GloBird Energy we’re keen to promote the use of solar energy and to make it as viable as possible for customers.

We spoke to Sam Kent, from Sky Energy Systems, to find out how he sees the rooftop solar market at the moment:

Everyone who was in the solar installation industry five or six years ago will tell you that was a bit of a golden age. Now things have plateaued a bit and it’s quite quiet, compared to what it was.

I don’t think that’s entirely true. I think the market has stabilised and there’s a slow and steady increase.

The common theme is that people are getting solar to save money, and environmental concerns are a bit of a bonus for most people.

Get the right advice

Sadly, people aren’t always getting the right advice on their solar installations and they’re installing systems that aren’t going to give them the results they’re expecting.

The problem with the solar industry is that often the sales person hasn’t had the proper training so the advice is too general, and lacks the specification for that household.

That means that there’s a lot of misinformation when it comes to the solar industry.

Customers are relying on us, the installers, to inform them on what the electrical terms mean and what they should expect from their solar systems. That means we have to ask the right questions about their lifestyles and what that household’s needs really are.

Some people want some really specific information and others want to understand one aspect or another, so you have to be prepared with a lot of information to be able to answer quite varied questions.

People’s grasp of what they’re looking at is generally quite basic, which is why we get a lot of questions around batteries.

A lot of people don’t understand that when the sun goes down it’s going to stop providing energy to their house.

People do understand that solar is supplying the household directly but don’t always understand that if you’re coming home at night, and that’s when you’re using most of your power, you need to get a battery.

That’s the gap that we’re mostly filling in for people: the difference between time-of-use solar and night-time solar.

Most people are aware that feed-in tariffs exist but some assume that they’ll get a lot more credit while others think it’s virtually nothing.

We tell people not to rely on it to offset their electricity bill.

While they understand that they can sell their excess solar-generated electricity back into the system, what they don’t realise is that what they get back for that is a lot less than what they’re paying for their night-time electricity.

We don’t want people to think they can offset their entire bill or even make money.

So, we do have to educate people on feed-in tariffs – which is when we tend to recommend GloBird Energy – and realistically what they might get back, and also that batteries can help them use the energy they collect when the sun isn’t shining and generating more.

One of the questions we ask people is how long they’re going to be in their house, because if it’s only likely to be a few years they have to consider whether having rooftop solar installed will add enough value when they come to sell, because they won’t be getting the long-term return on their investment that comes from the reduction in their bills.

There are a number of reasons people go solar

The fear of security of supply – hearing about the brown outs in South Australia – coupled with the closing down of Hazelwood and the realisation that cost of electricity is sort of doubling every four years, it does make getting solar make a lot more sense … especially for those who are more analytical.

Previously it was more of a cool thing, and now it’s a combination of the financial factors and the reassurance that you can have that backup if for some reason the system can’t feed you.

I’m quite big on the environmental side of things, but I know that’s not the most important thing to everyone, which is why we would never say that everyone should get it.

As a general rule, it’s becoming more practical for the average household, especially with the cost of batteries coming down.

For some people. it’s a numbers thing and some it’s an environmental impact thing and there’s a third factor now which is the blackout or brownout protection.

It’s not standard to get batteries, but people are already giving us feedback about how glad they are when the family house has power when the rest of the street is blacked out.

For example, I heard from one customer who’d had solar for about two weeks and he came home one night and the entire street was blacked out. He pressed the button and his garage door opened and he could turn the lights on in his house, so he was pretty happy with his decision to get solar and a battery.

Sam Kent is a Director of Sky Energy Systems