Will either party really make your energy bill cheaper 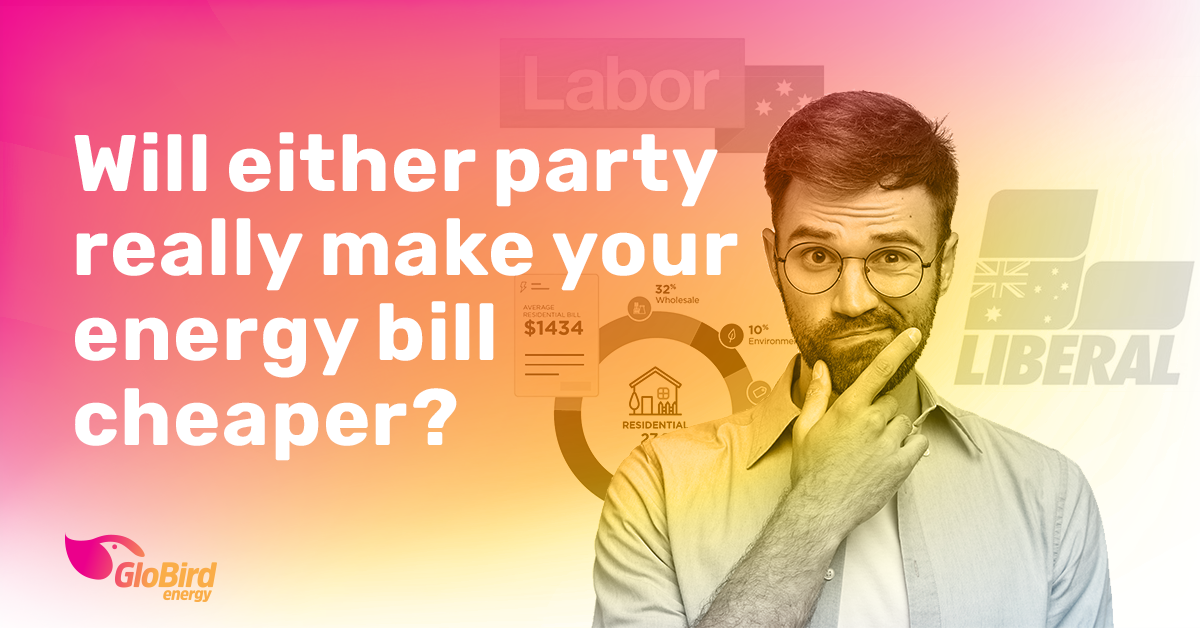 The cost of electricity and gas has become a significant election issue, as both major parties take potshots at each other over the rising cost of living.

You won’t be surprised to know that we spend a lot of our time thinking about the cost of energy in Australia – and not only at election time or when the overall cost of living is biting hard. It simply comes with the territory, as we constantly look for ways to offer you the best value electricity and gas plans.

We will always be transparent about how we operate and, in keeping with that approach, we have to make two concessions. The first is that it’s now inevitable that the cost of electricity and gas is going up, so your bills will be bigger in the next couple of months. The second is that, as much as we put downward pressure on the parts of the bill we can control, some costs are outside of our control.

Who or what controls the price?

No matter who wins the election, politicians also have limited control over costs. One of the challenges politicians are grappling with is the balance between the reliability, sustainability, and cost of energy. For example, Labor’s energy spokesperson Chris Bowen told The Guardian that “Labor’s Powering Australia plan will get cheap, reliable electricity pumping through the Australian grid”.

In the past we have written posts explaining how the cheapest generation (solar) is intermittent and therefore less reliable than traditional generation. Plus, it only makes prices cheap for a period of time when the sun shines, but it does little to lower the overall cost of energy unless it is paired with equivalent energy storage.

Unfortunately, there is far more solar than storage in the grid. Labor says its plan is based on further reliance on renewables with storage, but if Labor wins government later this month it won’t be a matter of flicking a switch. The amount of storage needed would take time to build and bring online. So, consumers would still bear some pain, even if only temporarily.

In reality, there is not a lot either party can really do about skyrocketing wholesale prices in the short term. The market is a fast-moving train, bigger and more powerful than retailers or Governments and driven by supply and demand. Only long-term structural changes will help, and that will mean the introduction of more generation and storage.

The drastic change in the sentiment of the national energy market can be summed up through these two headlines from abc.net.au, just three months apart:

That more recent article came on the back of the Australian Energy Market Operator (AEMO) reporting that wholesale costs had soared 141 per cent in the three months to March 31, compared with the same period in 2021.

During the first three months of this year, the average wholesale price of electricity was 67 per cent higher than the previous three-month period, October through December.

A few weeks ago, we explained How the supply-demand equation is likely to influence your gas bill and, again, this is all about demand outpacing supply (or, in the reverse, supply not being able to meet demand).

In a nutshell, wholesale electricity prices have jumped due to a combination of coal plant outages, higher demand amid heatwaves, and surging gas prices, driven (at least partly) by the war in Ukraine.

Will the wholesale price stay high?

There is an old saying, the only cure for high prices is high prices. Higher prices incentivise companies to build more generation and storage, because they can see that it will be worthwhile. In a way, the market is a self-fixing mechanism. Unfortunately, this is not an instant fix.

All indications are that we’re looking at high wholesale prices for the next year or so, particularly in Queensland and New South Wales, as more coal-fired power stations are decommissioned.

Industry analysts estimate that the average residential electricity bill, currently $1434 a year*, is likely to rise around 20 per cent (almost $300) in the coming year.

Because there just isn’t enough electricity to go around at the moment, everything the generators need to do to keep supply at least somewhere near demand is costing them more.

Simplistically, it’s because we’re in the midst of what is turning out to be a painful transition to a greater reliance on renewable sources of generation.

When we do have a more complete and robust supply of renewable energy, backed by firming services such as batteries and pumped hydro facilities, costs will go down.

But, in the meantime, we face a period of volatility, which means it’s going to cost more to generate and supply electricity.

The most recent report from the ongoing Inquiry into the National Electricity Market by the Australian Competition and Consumer Commission (ACCC) was released late last year.

The ACCC found that the annual cost to supply electricity to an average Australian residential customer is $1,434.

As you can see in this diagram, nearly half of that is the network cost, a further third is accounted for by the cost of wholesale electricity, 10 per cent is attributable to environmental costs, another 10 per cent to retail and other costs, and just three per cent – less than $50 a year – is our retail margin. 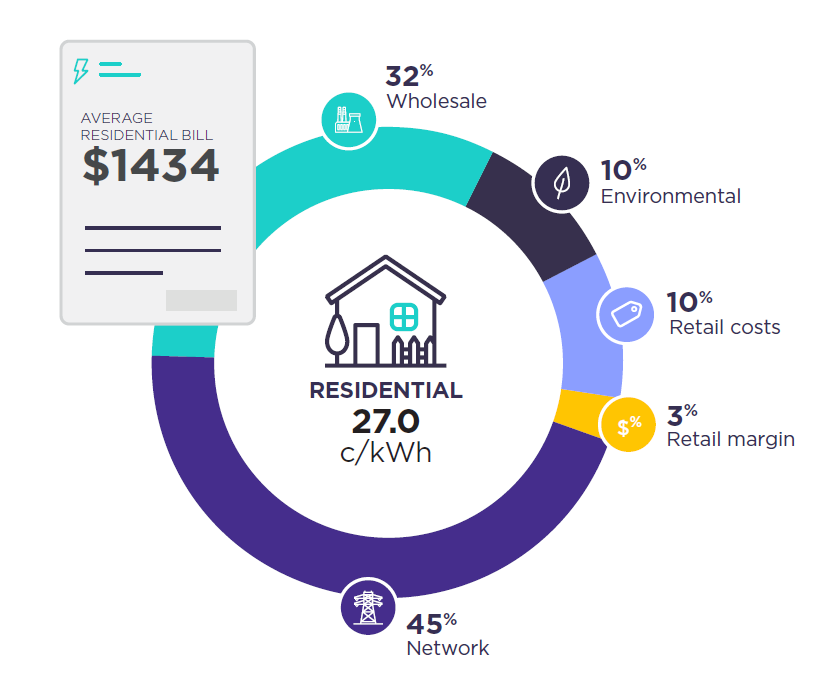 The ACCC made the point that “Retailers’ margins in 2019–20 were the lowest we have observed”.

The report also notes that “There has been a multi-year trend of gradual reductions in retail costs and margins. This general pattern is found across most National Energy Market regions and for both residential and business customers”.

Here at GloBird Energy, we have always made a concerted effort to keep our costs down and to be able to operate on small margins, so we believe that it’s likely that our costs and margins are even lower than that average from across the market.

The breakdown of the average residential electricity bill wasn’t all that different when we wrote about The state of electricity – according to the ACCC back in September 2019, including this paragraph:

“Across the NEM, the cost of maintaining networks and distribution now accounts for 42% of the average customer bill, the wholesale cost of electricity takes up 33%, green schemes 8%, retail and other costs 11%, and retail margins around 6%.”

So, from 2019 to 2021, the Network component has risen from 42 to 45%, the Wholesale contribution is down from 33 to 32%, the proportion attributable to Environmental or ‘green schemes’ has risen from 8 to 10%, while Retail and other costs are down slightly from 11 to 10% and the Retail margin has been chopped in half, from 6 to 3%.

Here’s the ACCC’s chart from 2007-08 to know, highlighting the changes over the past 2 years: 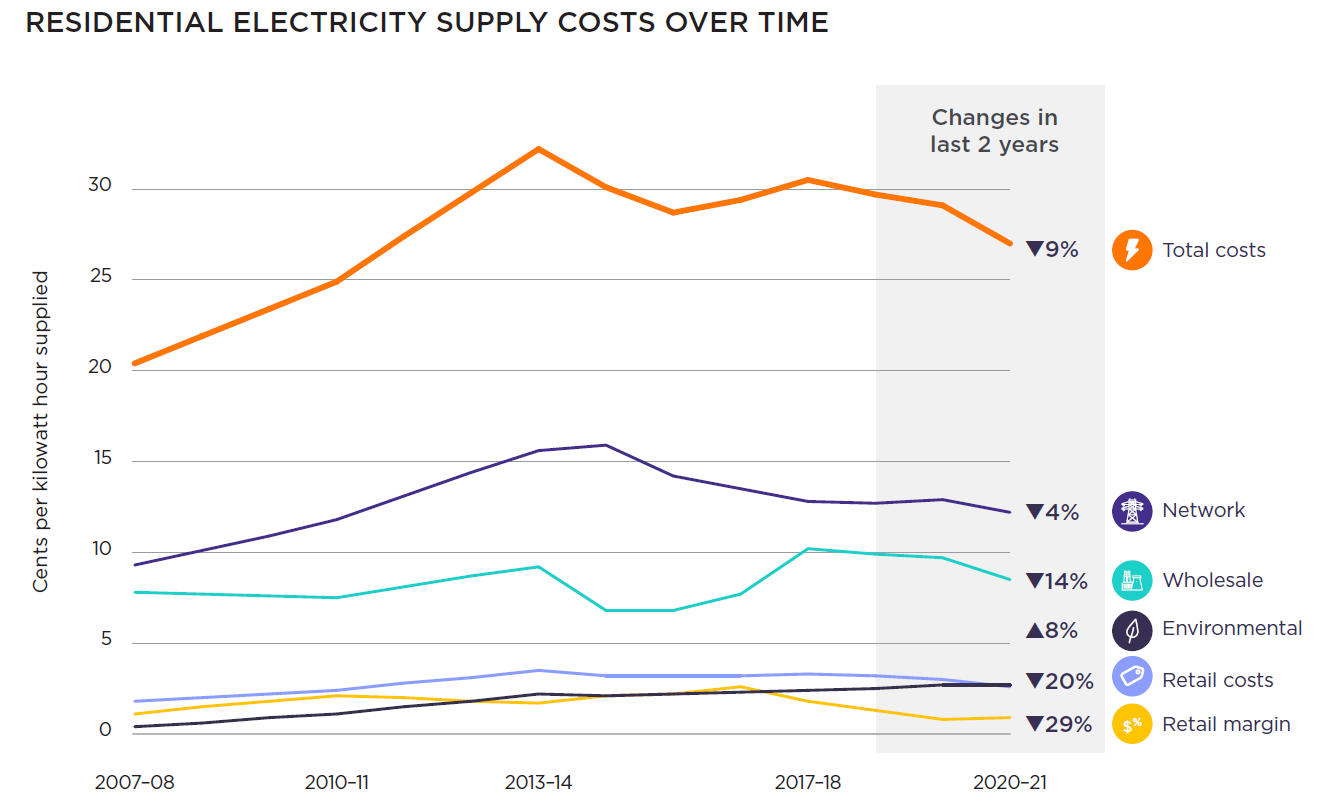 The cost of doing business

The ACCC makes these points in the latest report:

“Environmental costs increased across the last 2 financial years, driven by increasing costs of the small-scale renewable energy scheme” and “There is a multi-year trend of gradual increases in this cost category”.

However, as we’ve just outlined, while the cost of wholesale electricity might have been steady for a while, it’s absolutely blown out over the past few months. In fact, since the report was released last November, wholesale prices have gone to a level that nobody – including the experts involved in this ongoing ACCC inquiry – anticipated or predicted.

Meanwhile, it hasn’t gotten any easier to be a retailer. Sure, we can do our best to keep our overheads low, but we have to also do our best to provide the level of customer service that you’re entitled to expect.

And that includes fielding any questions about bills and trying to help you understand the broader landscape (as we do with our fortnightly blog posts, like this one).

Mind you, we wish we could do more about rising prices than just explain them ….