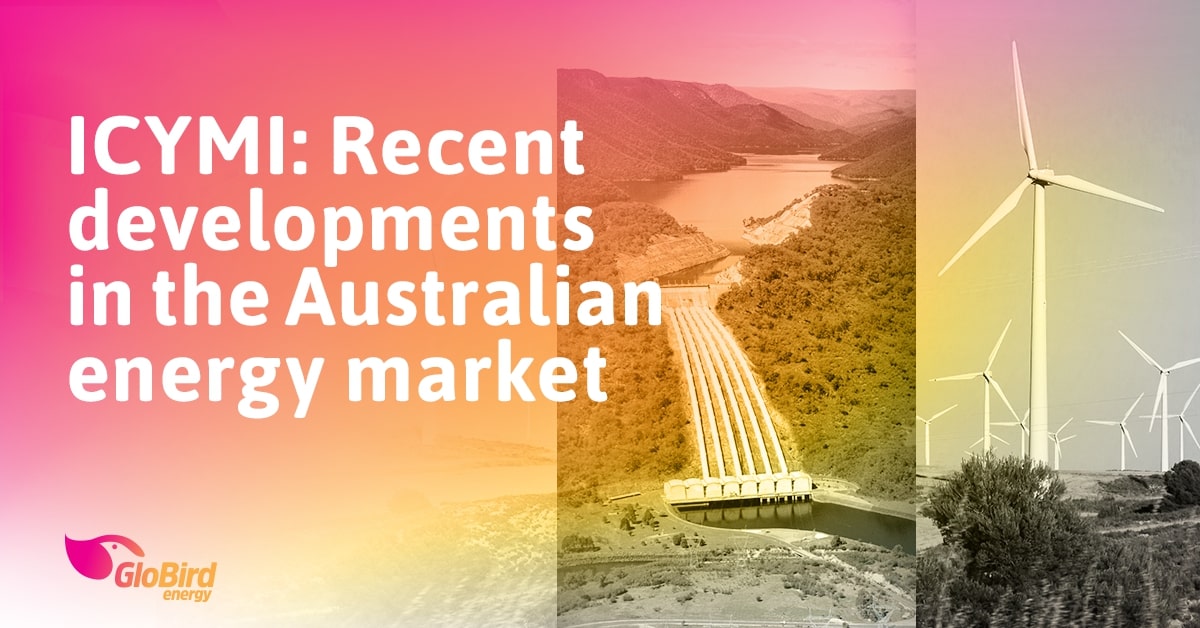 We can totally understand if you hardly ever think about electricity or gas – apart from when the bills land.

We’re also well aware that more and more people are thinking about energy topics, including issues around generation sources, security of supply, development and maintenance of infrastructure, and advances in technology.

That’s the main reason we write regular blog posts: there’s plenty going on and there are people who like to keep informed.

This week, rather than choosing a single topic, we’re going to give you a round up of just some of the things that have happened over the past month or so, in case you missed them …

South Australia’s high uptake of renewables has led to a national energy milestone: the first quarter – anywhere in the NEM – when the daytime average has fallen below zero on a consistent basis.

Wholesale prices across the country fell, helped by a milder summer and increasing amounts of renewable energy generation.

There were also prolonged periods of negative spot prices in Victoria, however, there was less trickle-through impact on average quarterly prices in that state.

Wholesale prices reflect the price of power paid by electricity retailers to generators, and eventually have an impact on household bills.

Of the almost 2GW of large-scale capacity added in 2020, the wind sector accounted for the bulk of new generation, adding 1097MW throughout the year.

This was a new record for the sector, comfortably surpassing the previous record of 837MW set in 2019.

Victoria and NSW getting better connected

The Australian Energy Regulator (AER) has approved the $45 million cost that TransGrid has outlined is required to upgrade the Victoria-New South Wales Interconnector (VNI Minor).

The Australian Energy Market Operator’s (AEMO) 2020 Integrated System Plan (ISP) identified VNI Minor as a project required to address cost, security and reliability issues in the National Energy Market, particularly ahead of the closure of the Liddell power station in August 2023.

Average residential customers in New South Wales will pay an estimated extra $1 on their bills in 2022-23 as a result of this decision.

The Snowy 2.0 project reached a significant milestone with the ordering of the first of three giant tunnel boring machines.

Named after Lady Eileen Hudson, an ambassador for the original Snowy Scheme and the wife of inaugural Scheme Commissioner Sir William Hudson, the TBM will excavate about 16m of rock per day as it digs the 2.6km main access tunnel for the project to provide access to the power station cavern, 800m underground.

The Australian Renewable Energy Agency (ARENA) has agreed to provide up to $47 million in funding for Genex’s construction of its Kidston Stage 2 Pumped Hydro Energy Storage (PHES) project.

Located at the former Kidston Gold Mine at the Kidston Clean Energy Hub in North Queensland, the project is a 250MW/2,000MWh PHES, equivalent to eight hours of energy storage.

The $777 million project will be the first pumped hydro plant to be built in Australia since 1984 and the first to be used specifically to support the integration of variable renewable energy generation from solar and wind. Construction is expected to be completed by 2024.

A 187km transmission line will connect the Kidston Renewable Energy Hub to the NEM.

The Queensland Government has announced five locations across regional Queensland to host a large-scale battery trial aimed at supporting the state’s world-leading uptake of renewable energy.

Almost one in three detached houses in the Sunshine State has a solar PV array on its roof.

The Australian Energy Market Operator (AEMO) and the CSIRO have teamed with the University of Melbourne, RMIT University, and global consultancy Stratagen as Australia’s contributors to the Global Power System Transformation (G-PST) consortium.

G-PST is an international group of electricity system operators collaborating with leading international researchers to accelerate the transition to low-emissions, low-cost, secure, and reliable power systems.

Dr John Ward, Research Director of CSIRO’s Energy Systems Research Program, said: “The cost of renewable energy is no longer our major challenge – integrating this energy efficiently into our electricity systems is what we need to solve.”

Meanwhile, AEMO Chief Operations Officer, Michael Gatt, explained that Australia is well positioned to develop solutions due, in part, to our world-leading penetration of renewables.

“Australia is at the forefront of the global energy switch to inverter-based renewable energy, allowing us to provide a unique perspective to develop the power systems of the future,” Mr Gatt said.