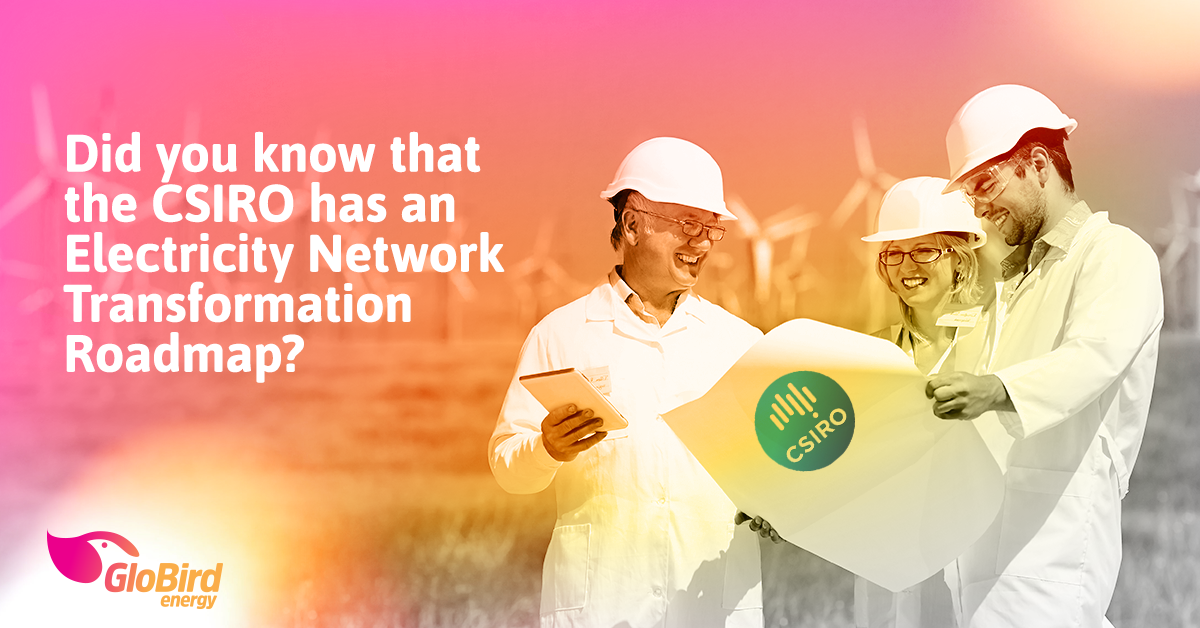 Whenever we write and post about what’s happening in the energy industry in Australia, we get a lot of quite passionate comments, many of which point to a belief that governments and regulators aren’t doing enough to address existing issues, let alone set us up for the future.

This prompted us to have another look at what Australia’s peak science body, the CSIRO, has been doing to guide the industry forward through scientific methodology and data.

Of course, whether government policy and investment, the uptake of technological advances, or business and consumer behaviour follow their modelling or recommendations is another matter.

But at least they’re trying to look forward, crunch the numbers, assess the possibilities, and point to what paths of action might be most beneficial (and in what ways).

Like it or not, agree with it or not, the sources of our electricity generation have been changing over the past decade or so, and will continue to change for the foreseeable future.

The high penetration of rooftop solar arrays, alone, has already had a significant impact on the broader market and industry.

Once you start looking 30 years into the future, it’s clear that coal will play a much smaller role in the mix, and renewable sources – in various forms – a much greater part.

In 2012 the Department of Resources, Energy and Tourism created the eFuture website to illustrate the energy scenarios used in putting together a corresponding Energy White Paper, which attempted to paint a picture of what might happen in the industry up until 2050.

At the time, they recognised and stated that “A secure and affordable electricity supply is crucial for Australia to maintain a strong economy and preserve our collective quality of life”.

They also acknowledged the complexity of understanding a rapidly-changing model, with different energy sources being integrated into the national energy mix, each with associated environmental, economic and social costs.

In other words, it’s all so complicated that we can only offer our best guess.

Here’s a graph that was generated by the eFuture tool: 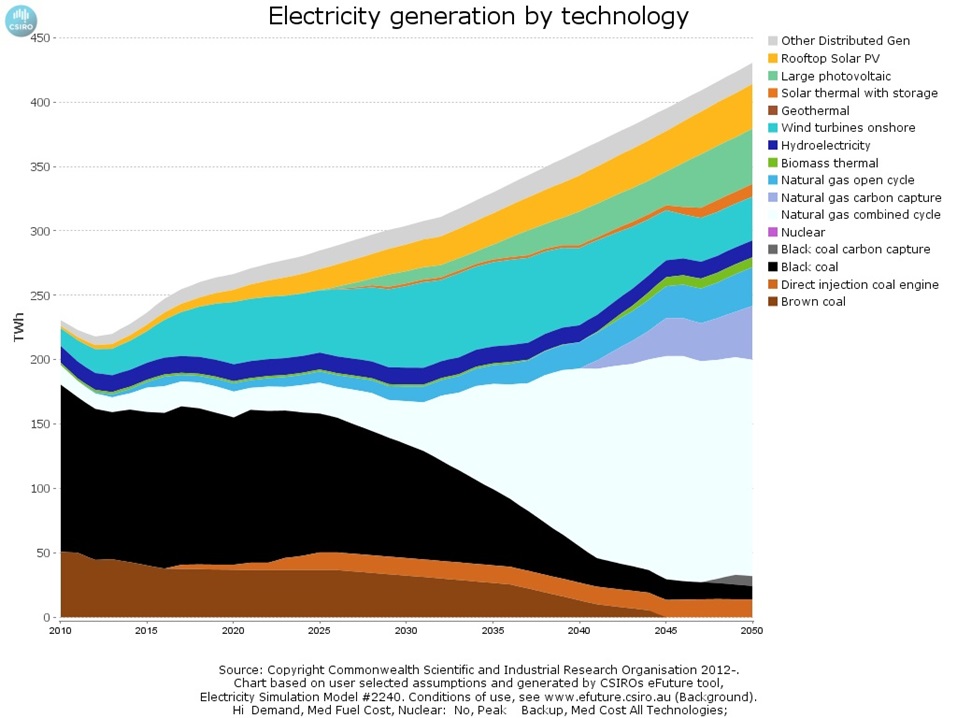 The next big step came in 2013, when more than 120 representatives of the electricity industry, government and the community came together at the Future Grid Forum.

The forum was convened to “develop and explore potential scenarios for Australia’s energy future and support the decision-making process around what comes next”.

According to the CSIRO, the forum was Australia’s first extensive whole-of-system evaluation encompassing the entire energy chain – from generation through to consumption.

The forum looked at the following four scenarios in some depth:

The aim of the Roadmap is to spell out a pathway for the transformation of the electricity network industry to support better customer outcomes while adopting new technologies.

More than 200 industry representatives were involved in more than a dozen workshops and webinars over more than two years as part of the public consultation process.

An interim report was released in November 2015 to share the early findings with the community, with a Key Concepts Report finalised a year later, on the way to the final report, which came out about a year ago, in April 2017.

It identifies measures which can achieve better outcomes for Australian consumers in the future, including greater choice, lower emissions, lower costs, and high security and reliability.

This slide from the final report launch presentation illustrates the projected outcomes of the Roadmap by 2050: 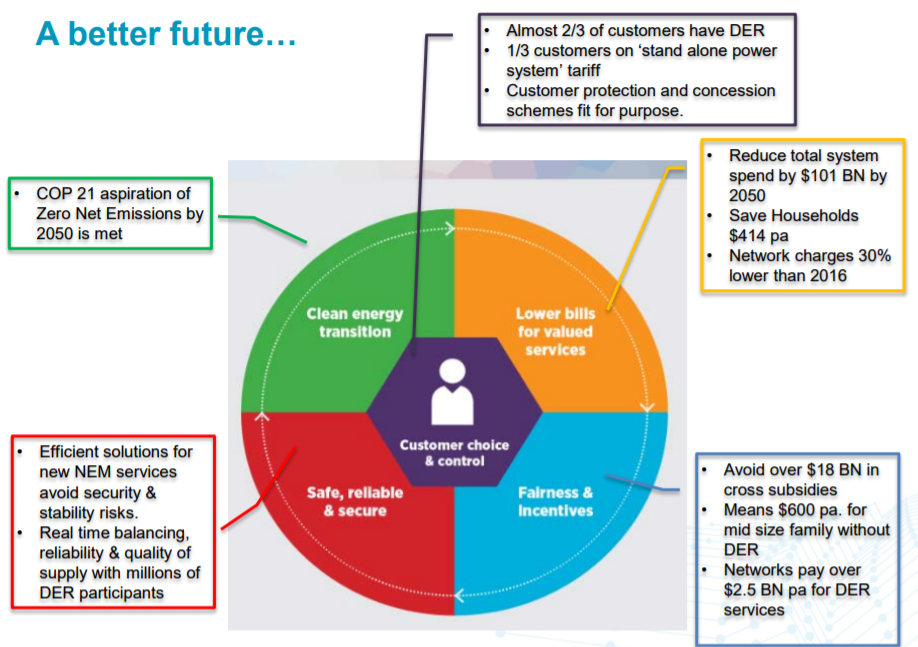 The Energy Use Data Model

At the same time, the CSIRO recognises that energy behaviour is changing so quickly it’s hard to keep up with the facts and figures.

With the growth of solar, the emergence of demand-response technologies, improved potential for storage, and the development of electric vehicles – among other factors – how energy is consumed across Australia will never be the same.

So, the CSIRO is creating a new system called the Energy Use Data Model (EUDM) to provide meaningful and accessible data in order to:

The federal government has committed $19.4 million in funding to the project, and the CSIRO plans to develop a user-friendly method for accessing the final energy use data model.

You can read more about the EUDM on the CSIRO website.

The next steps, already underway, involve the implementation of the Electricity Network Transformation Roadmap’s 45 Milestones and 158 Actions. Energy Networks Australia is working on 11 flagship programs.

They’ll monitor and report on the success and viability of those, so that all stakeholders in the electricity sector can have the most comprehensive data on what sorts of projects will be most efficient and cost-effective.

Then, if all the stars align, they predict that the average residential electricity bill will be about $400 less. 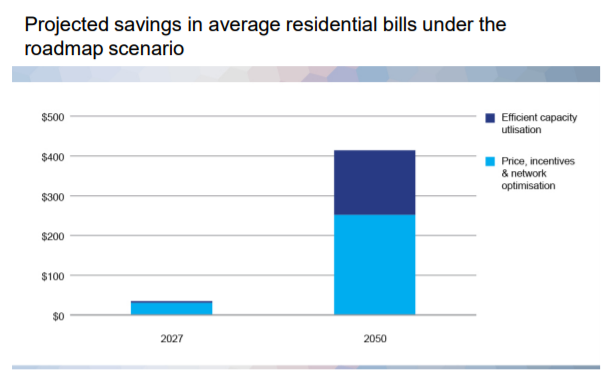