What you should know about Virtual Power Plants 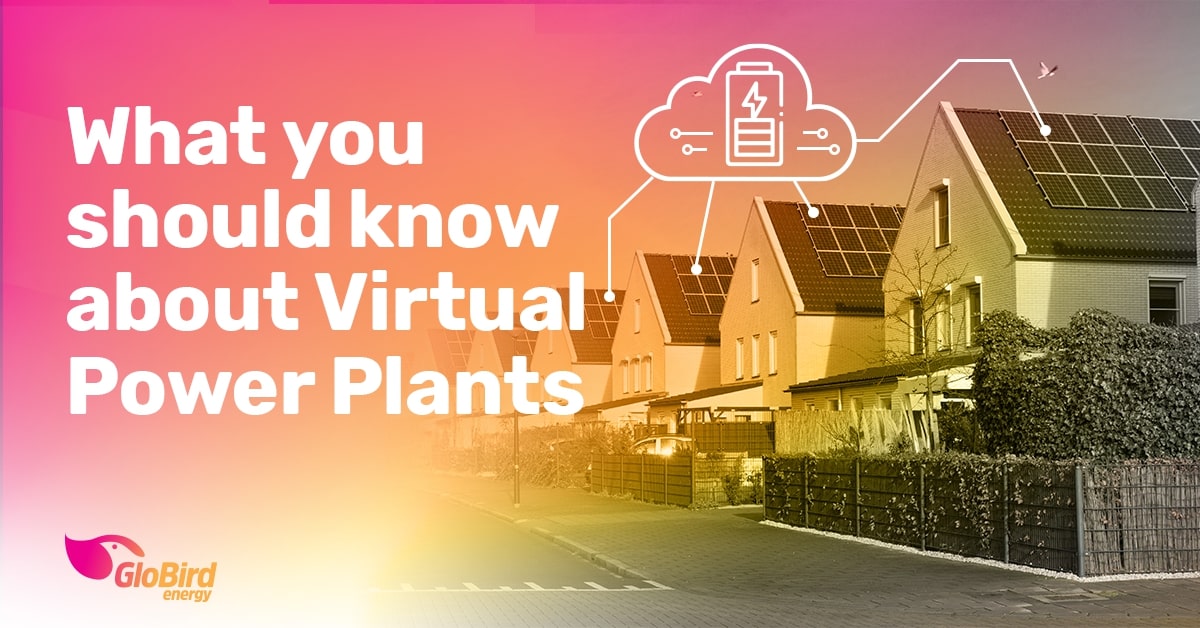 We’ve written previously about the impact of the high penetration of rooftop solar on the Australian energy market and the infrastructure that distributes electricity, the grid.

In short, the high take up of rooftop solar across Australia has changed the crucial supply-demand equation without our systems really being ready for those impacts.

Of course, rapidly changing technology isn’t going to stop changing rapidly so we can get all of our plans in place, and we’re well into the next phase of adjustment: battery storage.

What battery storage means to the supply-demand equation

Lots and lots of households with rooftop solar PV arrays mean that when the sun is shining, there is less demand on the traditional energy generation sources – like coal-fired power plants – during those times.

But it also means that when the sun isn’t shining, demand rises steeply. In other words, the variation between low-demand times and peak-demand times is significant and, at times, problematic.

As more households add battery storage to their solar system, thereby becoming even more self-sufficient 24/7, the demand peaks are starting to get a little lower.

The next step is households with excess energy stored in their batteries having the means to redistribute that excess to others, potentially making energy cheaper. While the demand peaks will still be there, the demand on the grid will be partially eased by this new ‘pool’ of home-battery-stored energy.

Welcome to the VPP

A Virtual Power Plant (VPP) is created by connecting a number of premises that have solar PV with a solar battery via cloud-based technology (hence ‘virtual’ as opposed to ‘actual’).

Like a traditional (actual) power plant, a VPP has the capacity to supply energy to other households and businesses.

The homes are connected by software that monitors, coordinates, and aggregates the pool of excess energy so that, rather than them all doing it independently, they are able to collectively sell power back to the grid. Remember that cheap power and reliable green energy is the holy grail.

The pool of energy collected and aggregated by the VPP can be traded on the national energy market (NEM) at peak daily price points, thereby making more money for the solar PV plus battery owners than they could have got as individuals.

How widespread are VPPs?

While VPPs are still in their infancy, once again Australia is at the forefront of testing the concept.

The first VPP project of significant scale ran in Adelaide from August 2016 to September 2019, with 1,000 household systems being installed and connected over that period.

Another VPP being closely watched at the moment is made up of 1,000 Tesla batteries installed in social housing in South Australia. Theoretically, this VPP provides almost ideal conditions to test the viability of the concept … and the SA Government has ambitious plans to expand to 50,000 low-income households to create what would be the world’s largest VPP, a 250 MW/650 MWh system.

Then there’s an apartment complex in Fremantle’s White Gum Valley which has installed software that allows its residents to trade solar energy in real time. The technology will be rolled out across another 10 developments in Perth over the next three years.

Meanwhile, Townsville has a not-so-residential VPP that includes a dozen large commercial suppliers (such as local zinc producer Sun Metals) giving it a capacity of 135 MW. They’re in the process of adding a community battery to that resource.

And there are a number of other VPPs either in the planning or early implementation stages.

The main barrier to more widespread VPPs is cost. While the cost of solar PV panels and solar inverters has come down, and subsidies from some governments are still available, battery storage is still relatively expensive.

With everyone hoping to put downward pressure on prices to make energy more affordable, the cost of this technology is a critical factor.

The complexity of setting up an effective VPP is also something that providers are still grappling with.

And then there’s the human component. Putting solar panels on your roof is one thing, adding battery storage something else again, but then joining a virtual network of like-minded solar users? How many householders will take up this next step?

A trial of the technology on 30 houses on Tasmania’s Bruny Island revealed mixed results.

Some participants didn’t like the installation process, while others weren’t a fan of the technology and disconnected from the virtual power plant after the trial.

“They’re kind of overly optimistic about the predictability of people’s behaviour in the energy context,” said Heather Lovell, a professor of energy and society at the University of Tasmania.

So, while the concept seems attractive, we’re probably some way from seeing VPPs everywhere we look, although there’s no doubt we’ll be hearing more and more about VPPs from now on.