What gives a home a high energy rating? 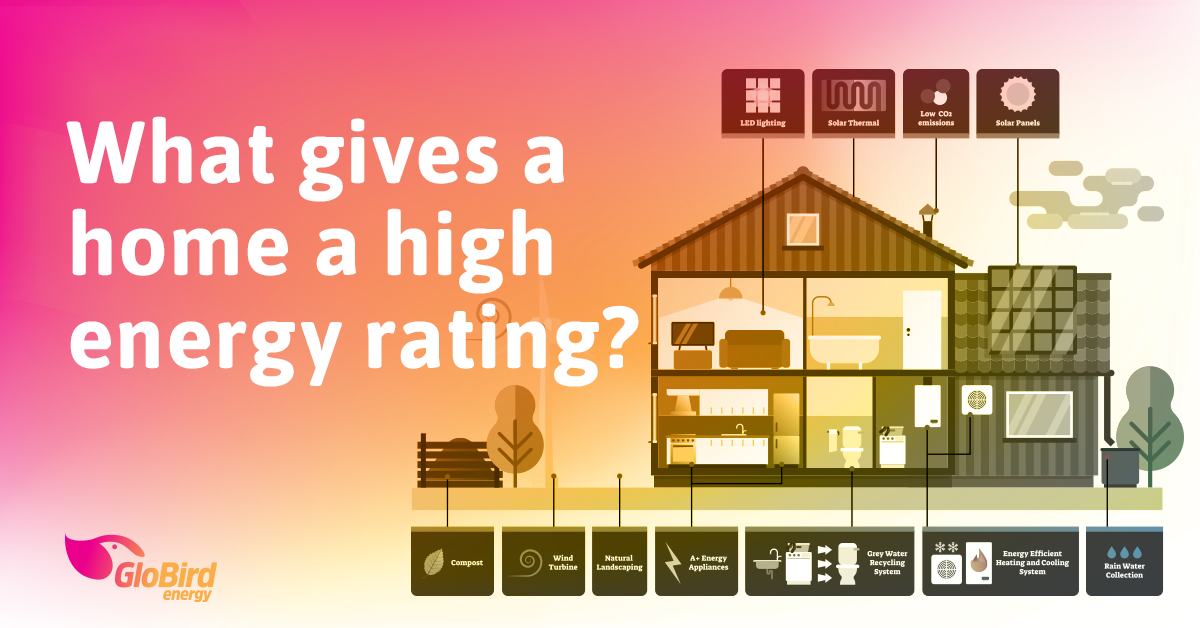 You might have noticed that home energy efficiency appears to be firmly on the agenda.

At the same time, among reforms aimed at improving the rights and conditions for renters are new minimum standards for the energy efficiency of rental properties.

And, in Victoria’s Draft 30-Year Infrastructure Strategy, released in December, Infrastructure Victoria recommends that by 2025 all homes for sale or rent should be required to disclose their energy rating.

Infrastructure Victoria, which is an independent advisory body, has also recommended that all new houses be built to an eight-star energy rating.

So, if you don’t know about home energy ratings, you probably should.

What is the star rating system?

In Australia, the rating system has been devised and is managed as part of the Federal Government’s Nationwide House Energy Rating Scheme (NatHERS), run by the Department of Industry, Science, Energy and Resources.

Energy assessors use the NatHERS rating tools to predict the amount of heating and cooling a house or apartment will need to stay comfortable all year round.

The findings are converted to a star rating between 0 and 10 stars, with 10 stars signifying the most energy-efficient home, one which might not need any additional heating or cooling to keep its occupants comfortable.

A 6-star rating is the minimum standard in most states and territories however it indicates only good, not outstanding, thermal performance.

Why are homes being rated?

Energy-efficient homes are more comfortable to live in and they cost less to heat and cool and they reduce our impact on the environment.

Houses with higher energy ratings are more naturally comfortable in winter and summer, and therefore easier and cheaper to heat and cool.

If you know your home’s energy rating and why it has that rating, you might be able to easily improve its energy efficiency. The difference between a six-star home and an eight-star one can be a few relatively simple and inexpensive adjustments, and the resulting improvement in performance would be well worth it.

What does NatHERS measure?

The star rating takes into account the building’s insulation, ventilation, orientation, layout, construction materials and glazing. Even the colour of the building matters.

While it doesn’t include things such as rooftop solar, hot-water systems, lights, and electrical appliances at this stage, it seems more likely than not that those elements will soon be considered as well.

At the moment, the scheme is used to assess the design of new homes before they’re built, however, the government is extending the program to offer voluntary NatHERS assessments for existing homes.

How does the average home rate?

The energy rating of your home is largely influenced by when it was built.

According to a study by Sustainability Victoria, the average rating of houses constructed in Victoria before 1990 is just 1.6 stars!

The average rating of houses constructed between 1990 and 2005 doubles to around 3.1 stars.

In 2011, Victoria mandated a six-star minimum NatHERS rating for new homes and apartments, as well as major renovations.

But even six stars indicates nothing better than a fair thermal performance, so it really is a minimum – and below the minimum set by many other countries.

In other words, the majority of homes in Australia are well below where they should be.

How much could you save with an extra star or two?

While it costs a few thousand dollars to build a new home to an eight-star standard rather than the minimum six, savings on your energy bills will quickly make up for that initial outlay.

Sustainability Victoria estimates that going up just one star from six to seven will reduce household heating and cooling energy needs by 30 per cent. An eight-star house will likely require half as much energy for heating and cooling as that of a six-star, and if you go up to nine stars, you’ll be using 80 per cent less energy.

And let’s not forget that your home will be more comfortable to live in!

How would you get an eight-star home?

It starts with the orientation of your home and immediately extends to its design and materials.

Orientation to the north with plenty of north-facing windows maximises warmth and light into the home over winter while allowing for shading out direct sunlight in the heat of the day during summer.

Incorporating sensible shading, insulation, and double glazing are the most obvious difference makers.

In addition, an energy-efficient home will have a relatively air-tight building envelope to minimise leakage of heat from the home in winter and into the home in summer.

Then there is the size of the home itself and the spaces within. A more compact footprint is more likely to lend itself to energy efficiency.

How to improve the energy efficiency of your home

Some simple changes to your existing home can have a significant impact on energy usage and bills and, therefore, your energy star rating.

Having better insulation in the ceiling, walls, and floors can save you up to 45 per cent on the cost of heating.

Better windows, for example with double glazing and high-performance PVC frames, coupled with external shading can reduce the amount of radiant heat entering and leaving your home.

Improving airflow can help you cut back on using your air-conditioner. Ceiling fans and louvres can also have a significant impact on your comfort levels in hot weather.

Lighter exterior colours of walls and rooves can have a significant effect on the internal temperature.

Don’t forget to match your plan to your usage

If you do make the effort to make your home more energy efficient, don’t assume that your existing electricity plan will still be the best one for your needs.

We recommend a regular review of your usage and your plan to ensure you’re getting the cheapest electricity you can.

But, in the end, the best way to reduce your energy bills is to use less.