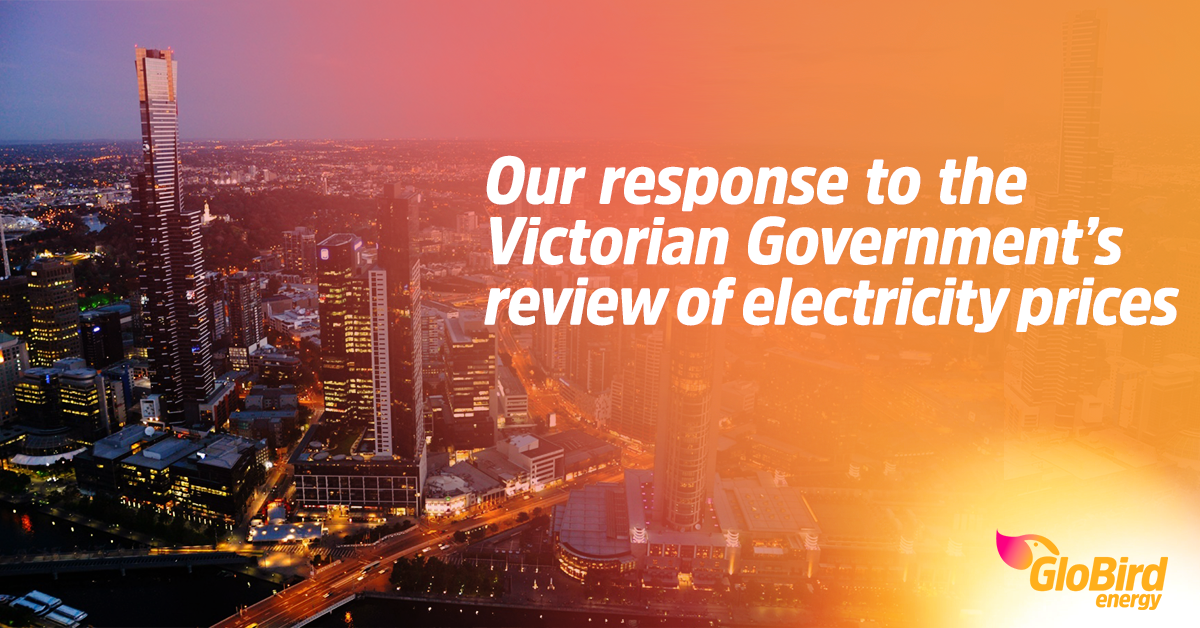 Late last year, the Victorian Government commissioned a review into the state’s electricity market. It was carried out by two former ministers, Terry Mulder and John Thwaites, and company director and business consultant Patricia Faulkner.

In August, the panel delivered a report which contained 11 recommendations.

Contrary to some media reports that these changes ‘will happen’, the Government has been consulting with the energy industry about the recommendations and will provide a response by the end of the year.

“This review gives us a plan of action that will see a better deal for Victorians,” she added.

So, what does GloBird Energy think?

Overall, we support the intent and direction of the recommendations, and we agree that many will achieve the desired result: to put downward pressure on electricity bills.

In fact, we agree with 9 of the 11 recommendations. However, we believe that two of them would have a negative effect on the market and have the potential to actually make things worse.

We also believe more can be done to help lower the price of power.

We’ve decided to split our thought into two posts. In this one, we will comment on the nine recommendations we support, and in the next one we’ll discuss the other two, as well as some additional thoughts we have put forward.

1) Marketing information on prices to be easily comparable

We agree and support this recommendation wholeheartedly. It’s time for a simple comparison rate in dollars and cents.

2) Contract periods, practices and variations to be clear and fair

Absolutely. We think retailers should make best endeavours to call, SMS, and email their customer at the end of a Benefit Period, when their discount ends.

They should be proactive in offering their best rates rather than placing the customer on an expensive energy plan. In our view, sending a letter at the end of a benefit period isn’t enough.

This is a fantastic initiative and probably the most effective way to actually help Victorian consumers make sense of their usage data and find the most cost-effective energy plan for their unique energy consumption patterns.

This is one of the benefits of having a smart meter, and it’s not being used to its full potential.

We agree. After all, energy is an important part of all of our lives, and the government should do a lot more to help and support vulnerable customers.

Yes, there should be a government-run scheme that helps this important group of customers gain access to a better deal.

6) Monitoring the market via the Essential Services Commission (ESC)

We agree. More transparency is something that the energy industry needs, and needs now. We also call for so-called ‘comparison websites’ to be more upfront about the commissions being paid for what is being presented as an impartial comparison.

Yes, retailers should sign up to an Industry Code of Conduct that puts the interest of the customer first. We would be proud to be the first company to sign up.

We can see the benefit of this idea. For example, we have a lot of solar customers, and we hear the good and the bad about installations and product quality. We think it would be helpful for Victorian solar customers to have access to the ombudsman when things go wrong.

Many people believe that the energy market is stacked in favour of the big multinational generators that dominate the market.

A review into the market is something we have been calling for. Over the past 12 months, most of the energy price increases we have seen are caused by the wholesale market, which has more than doubled since Jan 2016.

In truth, retailers have acted as a cushion by NOT passing on the full wholesale cost increase to retail customers yet.

We expected some price increases when Hazelwood was shut down, but this does not explain fully why the wholesale market price has more than doubled. The cost to produce energy hasn’t changed significantly after Hazelwood shut down, yet generators are demanding more than twice as much as before. An independent review should ask “is the market being manipulated?” and “are generators taking advantages on the energy supply shortfall?”.