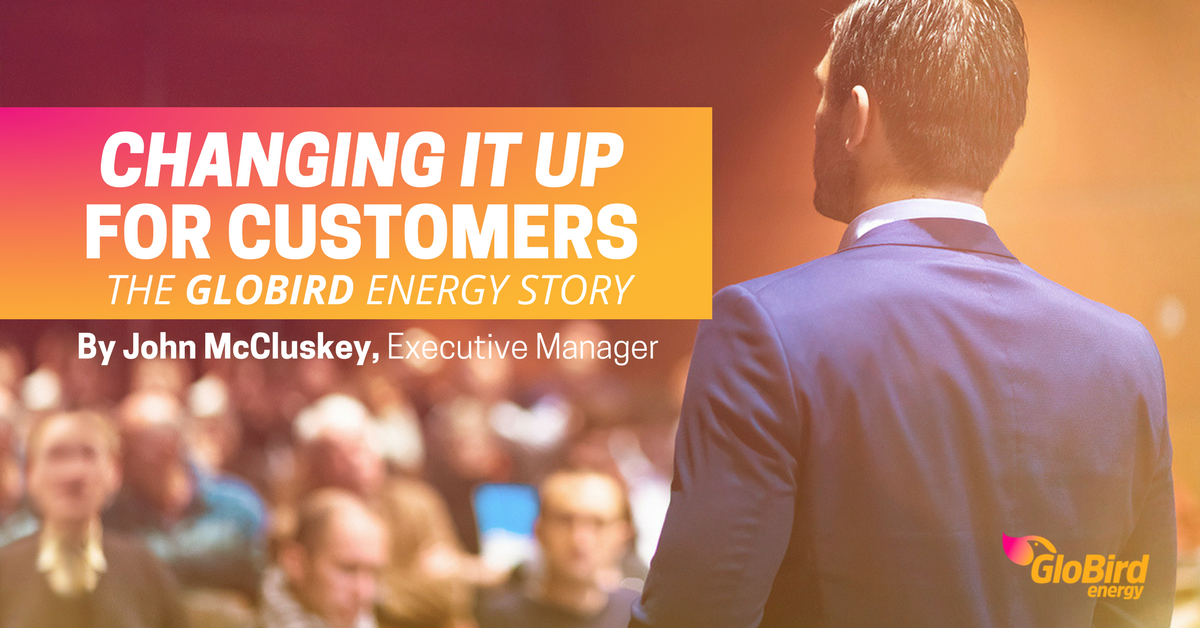 My mates love to laugh when they see me do battle with a voice recognition phone system. I keep repeating the same word over and over, just louder each time.

I also get stumped when I go to a big company’s website and they seem to hide their phone number. I’m so determined to find it. Why is it so hard to just call them up and talk to a person? Why can’t it just be easy?

I know others feel the same way, and that GloBird Energy isn’t the only company to think that being small and local can actually be an advantage in the marketplace. Some people see small and local as a good thing.

We started out by believing that not only could we challenge some of the big, established corporate players, but that we should do just that.

How hard can it be?

You don’t need to have had a bad experience with one of the massive energy retailers to know that there is a great deal of dissatisfaction with the way they operate, for lots of different reasons. I had one specific experience that made me question the status quo.

I was a customer of one of the leading companies for many years, and then for whatever reason I didn’t get a bill for well over a year. This was about four years ago. I found out later that they had done some sort of upgrade to their billing system, and tens of thousands of customers like me didn’t get bills for ages.

All I could think was: “Wow. How rich is this company that it can forget to bill people and not even know, let alone fix the issue promptly?”.

When they ended up figuring it out they sent me a massive bill that knocked my socks off. No apology, no warning. That’s when I really started questioning things about this industry. How badly is it run?

We just thought we could do it better. Mind you, everything looks easy when you’re drawing a business diagram on a napkin with wide-eyed optimism.

Two pivotal things to get right

We analysed the market. We looked at all the offers that were available out there and we analysed the average customer satisfaction and found that they weren’t hard to beat.

Our research told us that there were two things that we needed to do well: the technical side and the human side.

So, the first thing was to make sure that we used data and information technology to deliver a good, reliable solution.

The second thing was: how do we view – and value – the customer?

Everyone’s familiar with big-corporation issues and just about all of us have experienced them. If you call up you can’t even talk to a real person, or you get connected to an overseas call centre, and if you miss your due date by one day you won’t get your pay-on-time discount.

So, to us, it was pretty simple. Let’s make it a little bit more human. Let’s make it that you can actually ring through and talk to someone, so if you do miss your bill by a day, you can call us and we’ll fix it.

A risk that seems to be paying off

Whenever you start something like GloBird, you take a leap of faith at the start. The phone doesn’t ring and you’re all wondering what’s going to happen, and then one day the phone actually does ring and you get a customer.

Then, over time, you start hearing back from the customers and they’re responding to what you’re delivering. You’re getting a message back from your customers saying you’re doing something right.

One of the things that we found interesting is that other bigger companies started to replicate what we were doing. Some of the features of our website and sign-up process and some of our offers were copied by bigger rivals, which we’ve taken as a compliment!

We realise and accept that there’s still a lot of apathy about the retail energy sector. People think: “it doesn’t matter who I go with, they’re all evil”!

That’s the default position for the majority of people and we’ve found that the only way you can get around that is when someone’s friend tells them: “these guys are different”.

But we have also tried to remove some of the barriers that stop some people making a change. We understand we’re asking you to make an effort, so we want to make it as easy as possible.

The best example is that on our quote engine where we made a very conscious decision to allow users to compare their bill and get a quote without having to enter their personal details. If we can’t save you money, then don’t sign up, but at least you’ll know you’re on a good deal.

We know that most businesses want to capture everyone’s details so if they don’t sign up straight away, there’s a call coming from a sales guy to hassle you.

We think that shows that we’re doing what we say we do: being people-friendly.